The Flurry is thrilled to present you with two 2023 Festivals: Winter Roots and Spring Bloom ❄️🤯❄️

This year you’ll have double the opportunity to be part of the Flurry, and the flexibility to participate at your just-right comfort level.

Our Winter Roots festival will be on the traditional Presidents Weekend in Saratoga, but will take us back to the early days of the Flurry through reduced programming focused on traditional New England dance forms such as contra and English country, along with swing all day on Sunday, couples’ dancing, and Balfolk. Spring Bloom, from June 2-4, will see the full scale, variety, and color of the contemporary Flurry blossom in a new outdoor environment at the Schaghticoke Fairgrounds (about a half-hour southeast of Saratoga).

We are delighted to branch out this year to explore the full Roots and Bloom of our rich Flurry heritage! In doing so we hope to preserve the depth, variety, and culture that are core to our Flurry programming, while being thoughtful about this year’s challenges and inclusive of all members of our community.

For more details and information visit our Q&A page here.

We hope you’re as excited about this as we are – so spread the news!

Want to receive news and updates about the Flurry?

The Flurry Festival is one of the largest folk dance and music festivals in North America, and draws roughly 4,500 attendees and 400 performers. 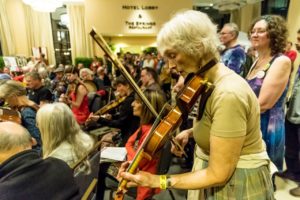 A volunteer committee of roughly 30 individuals work with Festival Directors and are committed to producing a welcoming event of traditional dance, music, instruction and entertainment for all ages.

Our philosophy: to present a high-quality, eclectic, feel-good festival of traditional social dance and music. Because most of the original (and current) organizing committee entered the world of dance through contra dancing, a significant portion of our program has been devoted to contras. Over time, additional dance styles have been added.

The Flurry serves as a showcase for the wealth of talented dance leaders and musicians from our area and beyond, as well as a venue to further develop their skills in a festival atmosphere. 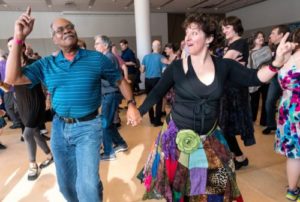 We are committed to our local talent. This is the backbone of our dance community. We fill many session slots with local and regional performers but also bring in a limited number of “special guest” performers from outside of our region.

The Festival is committed to encouraging and supporting our performers as much as we can within the limits of our human resources and budget. The festival happens because hundreds of people volunteer their time to make it work. We cannot afford to pay performers what we think their services are worth, but we are working toward that goal.

WE’RE SPONSORED BY THE DANCEFLURRY ORGANIZATION

You can help by becoming a sponsor, volunteer, or a member of the DanceFlurry Organization, and by buying the music and books at the performers’ sales table at the Festival.

It was pure luck that the Dance Flurry Festival (now called “The Flurry”) came into being.

In 1987, Nancy Gretta and Paul Rosenberg were car-pooling to the Brattleboro, Vermont, Labor Day Dawn Dance. As they drove, they reminisced about how wonderful the one and only Old Songs Winter Dance Fest had been. In the Autumn of 1986, the 2nd annual Winter Dance Fest was in the planning stages when the director stepped down, and Nancy had just learned that the 1988 festival was also canceled. She asked Paul (partially in jest) if he would organize a replacement festival. 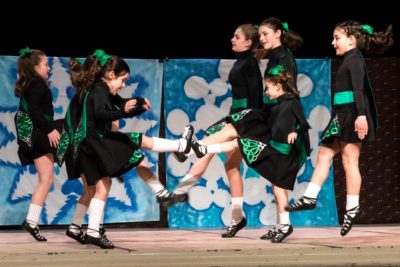 The wheels began to spin, and Paul thought a smaller, one-day winter dance festival could be a logical extension of the Schenectady contra dance series, which he had developed earlier in 1987. This series was (and its successors still are) unique because it was totally dedicated to the showcasing and development of callers and musicians from within the Capital District of New York State.

The Hudson-Mohawk Country Dancers (later known as Hudson-Mohawk Traditional Dances, Inc., and now as the DanceFlurry Organization) was formed as a not-for-profit chapter of the Country Dance and Song Society (CDSS) around 1987, which allowed for grants and the ability to obtain liability insurance.

The Festival evolved to become a three-day extravaganza, which was held for several years at the Farnsworth Middle School in Guilderland. In 1994, just two-and-a-half weeks before the Flurry, very cold weather burst water pipes in the school’s gymnasium and ruined the floor. The Flurry organizers scrambled to find an alternative venue, and managed to cobble together a festival held at several venues in the city of Saratoga Springs. The location was a perfect match, and Saratoga Springs has been the home of the Flurry, ever since, and the attendance — including over 400 performers and 300 Flurry staff and volunteers — has climbed to over 5,000.

Around 2010, the “Dance Flurry” festival name was changed to reflect both dance and non-dance events (an often said reply to being asked about attending the “Dance Flurry” was: “Oh, I don’t go, because I don’t dance”).  And so, “The Flurry – A Festival of Traditional Dancing and Music,” became the proper name and motto, known now as “The Flurry.” The organization retained the “DanceFlurry” name and hosts The Flurry, as well as a fall Adirondack dance weekend, and an assortment of dances throughout the year.

Check out all the sights from the 2019 Flurry Festival

View events
From
Our Blog

The Flurry Festival blog... read the latest news and announcements!